Over the weekend of October 26-28, we showcased our in-development game Where the Snow Settles at Australia’s largest gaming expo: PAX AUS. PAX, a part of Melbourne International Games Week (MIGW), is aimed at games enthusiasts from all walks of life and attracts thousands of local and international visitors every year. It’s a place where gamers, developers and publishers can meet, chat, hang out and most importantly: play games. 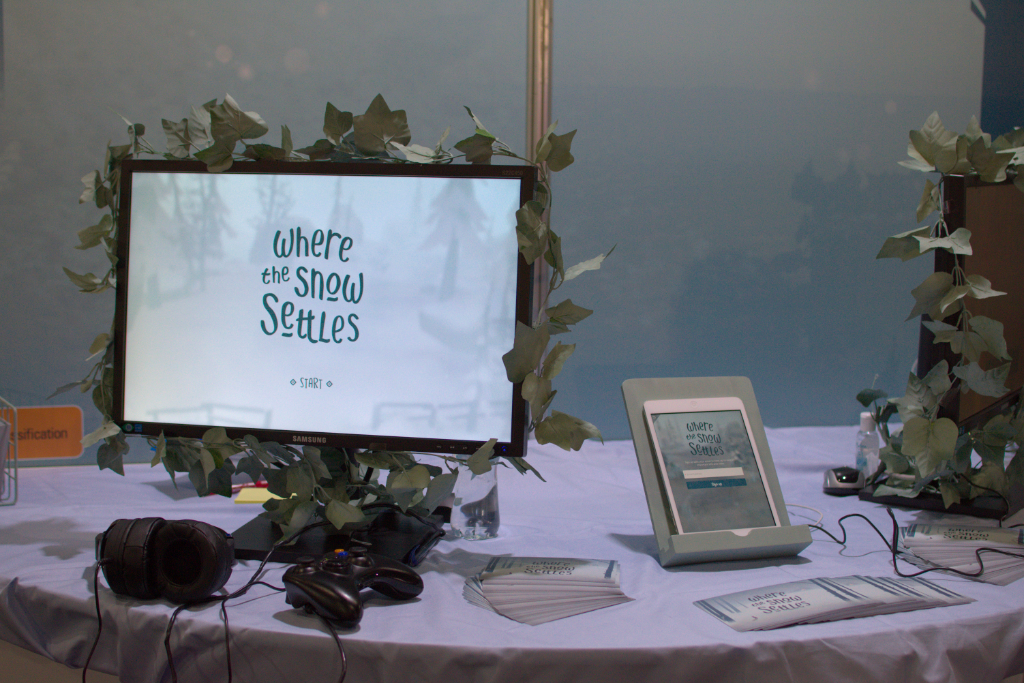 Although we only announced the game publicly via social media in early August; behind the scenes we were planning for PAX, and working towards a demo to show in the upcoming months. Everyone on the team had been to the show before in one capacity or another, but this would be our first time having our own booth showing our own game. We knew we wanted to do it right and spent a lot of time trying to ensure our first showing was a good one (both for us and those who came to play our game).

A lot goes into taking a game to an event like PAX: applying and getting accepted to be on the show floor, producing and organising marketing materials, working towards a solid and stable build of the game to show on the weekend, designing the look of the booth itself. The list seems almost endless; which machines were we going to run on? Which controllers do we need? What sort of headphones? Do we fly our stuff over, or buy it there? What are our redundancies in case something breaks!? Phew!

Despite being a young studio, we pride ourselves on being as diligent and organised as possible, which thankfully meant there was no crunch to get our demo ready for the public before heading to Melbourne. That said, there’s always little stuff… There may have been some dialogue tweaking and cable issues during setup on Thursday, but overall we were relieved by the smooth setup pre-PAX.

We were located amongst dozens of other amazing indie developers in the PAX Rising section, right near the entrance to the expo hall. The Australian game dev community is small, and the Tasmanian community is even smaller, so having two other fellow Tasmanian studios in the section with us (in Giant Margarita and Salty Studios) was fantastic.

Somehow through a combination of coffee, hard work, coffee, organisation, coffee, generous volunteers and quite possibly a bit more coffee, everything came together for the start of Friday morning. We had some great chats and met some of our developer neighbours before several thousand enthusiastic gamers came in at 10am. 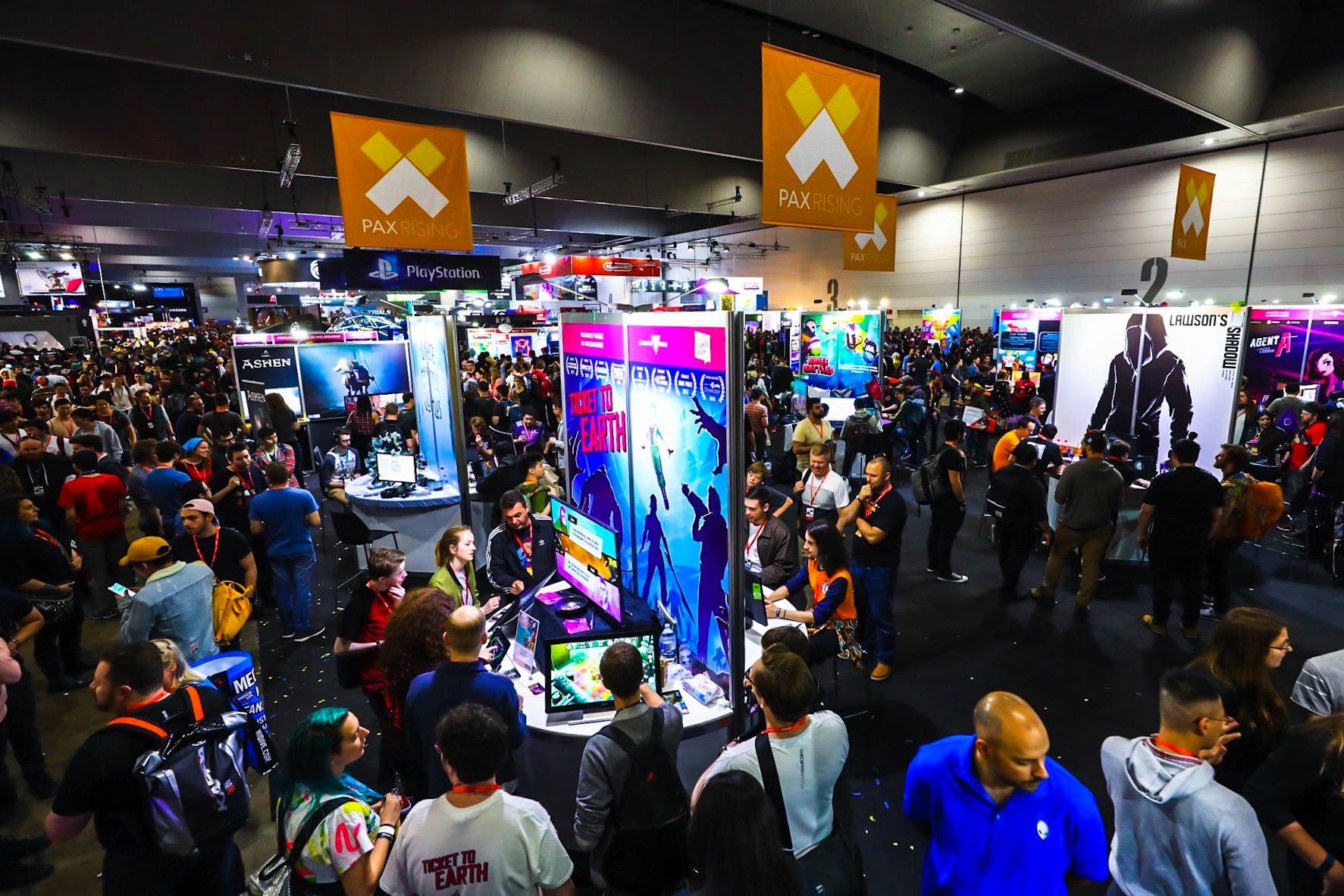 We were lucky enough to be in a prime location to show the many, many thousands of attendees over three full days what we have been working on for over two years now. With the help of a few amazing volunteers we were able to have a rotating roster of our team on the booth which allowed us to survive the weekend and roam around and check out all the cool games! Oh and coffee helped too. Did I mention coffee?

As our first day on the show floor, Friday felt like a big day; but Saturday was even busier. Some of the team hung out with some Melbournian friends on the Saturday night to reflect on progress, recharge, and play games together. By Sunday we were all tired, but the infectious positivity and enthusiasm from all the attendees passing through certainly kept us going.

It’s difficult to keep perspective when working closely on a project. You do your best to make something unique and interesting, and you hope that others will connect. Thankfully people did. Players young and old came along, popped on our noise cancelling headphones and escaped the bustling show floor for little while and experienced the world that Aurelia lives in.

From the kids who walked away with a smile on their face to older players who mentioned that the experience really drew them in and made them forget where they were, we are immensely grateful to each and every person who came to chat, play, watch and experience ‘Where the Snow Settles’ with us.

We got some great feedback that we’re keen to start acting on as we get stuck into production and already can’t wait to come back next year and share the rest of Aurelia’s story with the world. 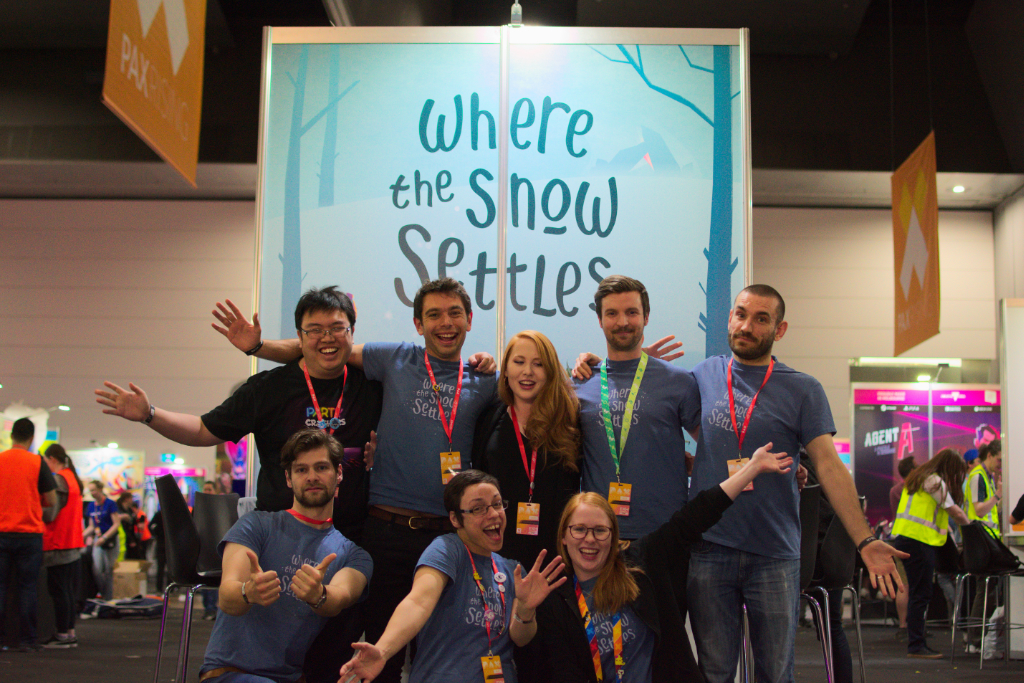